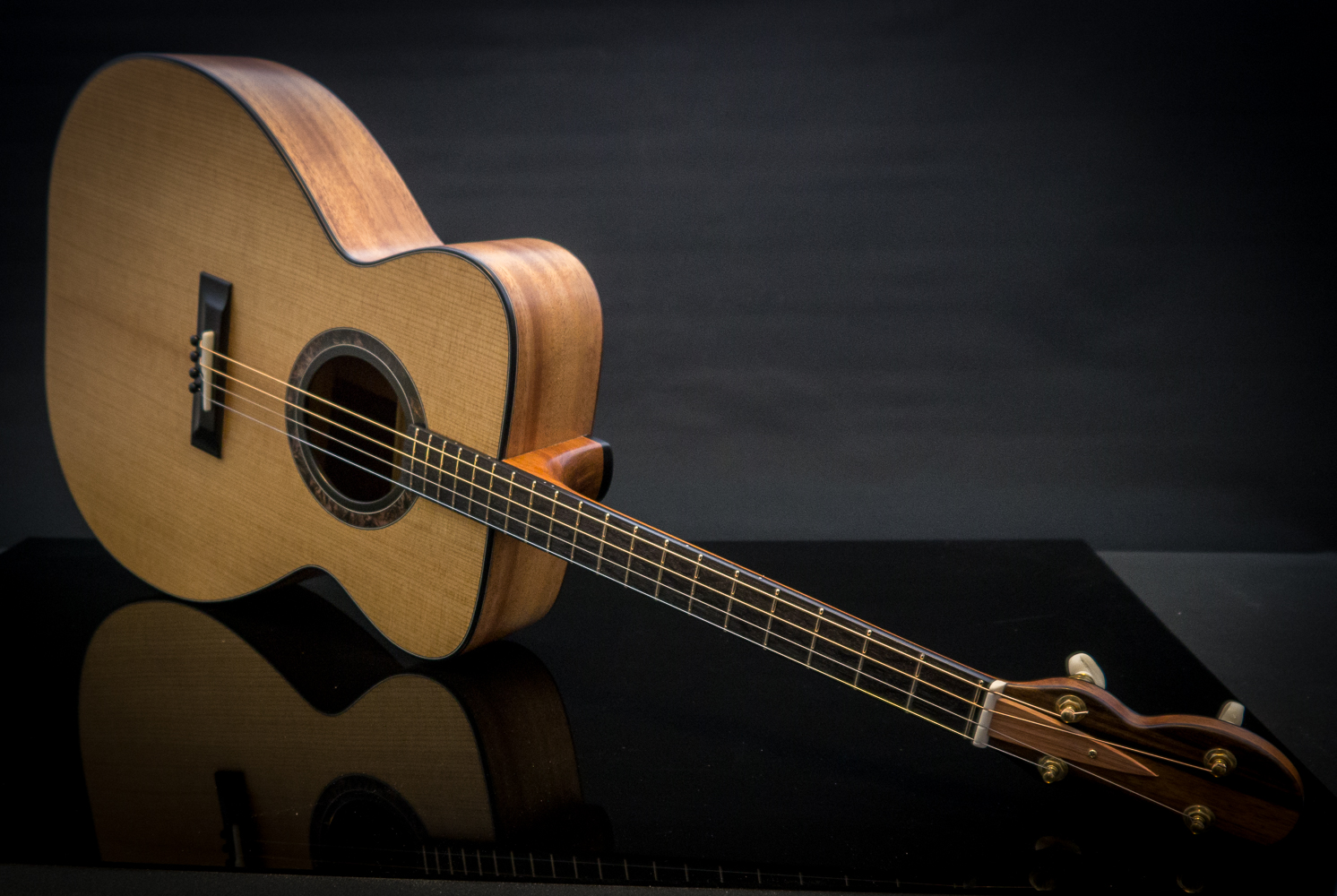 When I worked for Stefan Sobell we only ever made one tenor guitar. It was a nice enough guitar and now lives in Scotland I believe. It was years before I gave tenor guitars another thought as they are such a tiny corner of the guitar world. No one ever asked me to make one, so I didn’t.

But one year (I think around 2014)  I went to the Sage music centre in Gateshead, I took an archtop guitar over and hung around the stage door, cap in hand, as Elvis Costello was playing and I knew he was a bit of a guitar fan. I don’t do a lot of “cold calling” as I find it rather awkward, but the Sage was 10 mins walk from my place, and a lot of big names do play there. It seemed worth a shot. I got chatting to Elvis’ roadie, a really easy going Glasgow lad called “Geordie.” the pair of us got on great and he and I showed the archtop to Mr Costello. He was polite, but wasn’t interested – and I could see why – when I looked on the stage every guitar there was “vintage” – but also on the stage were quite a few electric tenor guitars. Cool looking guitars. What I had turned up with just wasn’t his sort of thing.

Now, scoot ahead a few months…that year was proving to be a bit of a tricky one – the chap who had sprayed my guitars for years had a bit of a personal meltdown and left me with a load of instruments to spray. Eventually, I found the excellent Bowling brothers in the south of England to spray my guitars and they turned out to be better than the original feller, but in the meantime, a local sprayer had helped me out – but what he specialised in what “relic” guitars. Making brand new, vintage-looking guitars. He’s superb at it.

So I had the bright idea of making a “relic” tenor guitar and returning to the Sage to tempt Elvis Costello, this time with something that might interest him. He liked tenor guitars, and he liked old guitars. So what better than turn up with an old-looking tenor guitar?

I called this “relic” range the Session King. They were designed to be stripped down, robust, loud and affordable. All the first Session King instruments were made with a relic finish. They looked really cool. Like an old guitar.

So, some months later, there I was again, at the stage door, with a relic finish tenor guitar. I hung around for ages, asking if Geordie was around. He wasn’t. So after a couple of hours of thumb-twiddling I went home. Mr Costello never got to see the Session King tenor I’d planned to tempt him with. Oh well.

The tenor guitar sat in its case for a few months, then I decided to make a video with it. I asked Ian Stephenson who was the best player for it locally. Without hesitation, he said “Tom Kimber.” I got in touch. Along with Seth Tinsley and Alisdair Paul, we went over to Ians’ studio in Ryton and had an afternoon of tunes.

That first video did really well, and I’ve made a lot of tenor guitars since, in part because of that video. The design has changed a little, and the guitars have a nice satin finish rather than a vintage relic finish. And of course, once a guitar goes out, others see them, try them and order them. So for the last few years, a sizeable chunk of my output has been these little four-stringed beasts.

I thought it was high time I compiled all the tenor guitar videos into one. So here it is:

A compilation of the fantastic tenor guitar music from my channel over the last few years. Featuring Tom Kimber, Ian Stephenson, Martin Reese and Christian Rizzalli.