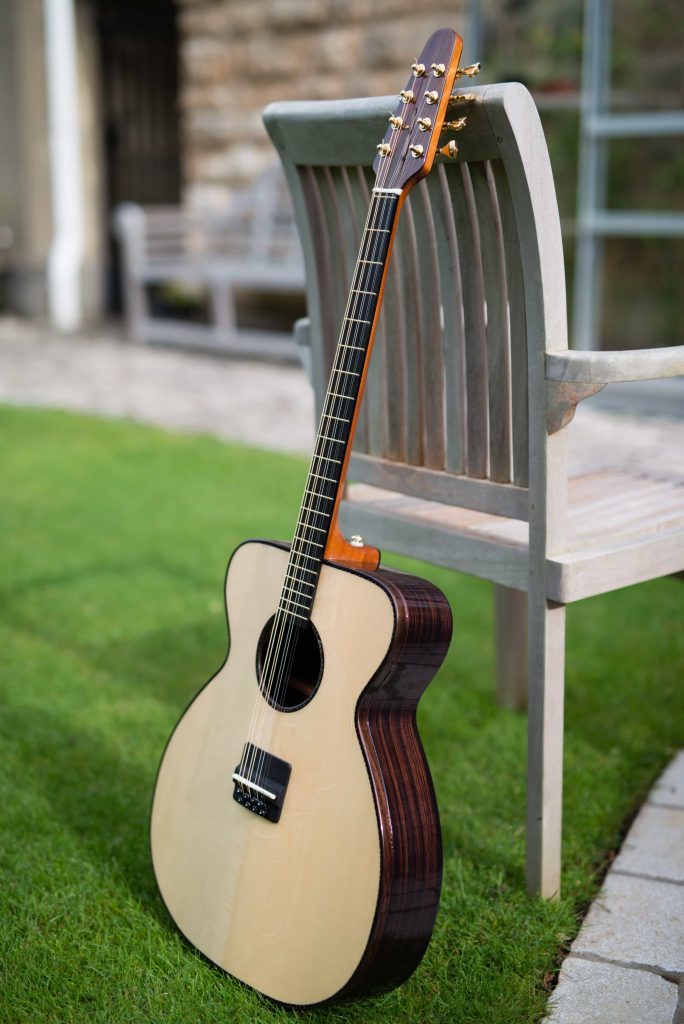 Those are the first two things most folk say when they play my guitars.

So why are my guitars so heavy?

This question comes up a lot. It’s true, compared to what others are making, currently I make rather heavy guitars and this goes against much of the stuff folk have read, been told or think about what a good guitar should be like. They think, have been told or read that good guitars should be light. Sometimes this is the case, but not always.

So why are mine so heavy? Well, it might be more helpful to ask a different question, and in tackling that, perhaps the first question will be answered.

Why are my guitars so loud?

They haven’t always been heavy, in the past they were “normal” and some were loud, and some were not, that goes for most makers, wether made in a factory or by small shops like mine. But these days all my guitars are loud. My guitars tend to be louder than most. Quite a bit louder.

What’s so special about loud? I’m after dynamics, and a wonderful rich sound…quality, not quantity.

The way I’ve always expressed it is this: if you make a warm guitar, that’s nice. There are lots of nice, warm sounding guitars out there. But it takes a very unusual player, someone with a very strong picking tecnique to get power and clarity from a guitar that does “warm” well. But if you make a guitar that is powerful and clear, most of us, given time will be able to find the warmth in there by experimenting with our picking hand. Making a guitar that is purposely “warm” means you’re limiting its dynamic capabilities more than if you make it with clarity in mind.

I’ll repeat myself, because this is the key: making the guitar inherently warm might be nice at first but it does limit the dynamic possibilities the instrument possesses. The limited tonal range will dictate what is played upon it, not you. Making a clear sounding guitar means the player is not limited by the instrument but by their own sensitivities.

It’s similar for “loud.” If you make a quiet guitar, or a normal guitar, you’ll be forced to work within the constraints of the instrument, which may or may not exceed the boundaries of your musical imagination. Another aspect of “sonic dynamics” will be trimmed. If you’re really unlucky you’ll find yourself with a warm quiet guitar, and you’ll be even more limited.

Maybe you don’t want “loud,” that’s fine, but it’s nice to have it as an option. You can play quietly.

Maybe it’s just the word “loud” that is causing you the trouble? Let’s swap it for another….how about “responsive”?

So, how do you make a guitar more responsive?

Well, by making the soundboard more reactive. Make it work harder. Build it as light as you dare before you get into the “danger zone.”  In crude terms, by making it louder.

So how do you do that?

You make the top lighter and the ribs heavier. It’s not the only way, but it does tend to produce reliable and consistent results. A while back I asked myself the question, what’s the loudest fretted instrument out there?

What makes the banjo so loud?

It ain’t complicated – banjo soundboards are very light and banjo bodies are very heavy. Energy put into the string, sets the light, low mass top in motion, and because the ribs are so heavy, the top can’t set the ribs/rim in motion. The energy is directed out the front as sound, it doesn’t “dribble away” into the sides.

So how does this apply to guitars?

Over the years a number of makers have experimented with increasing guitar side mass and/or stiffness. This is usually done through laminating sides with several layers of wood. French Classical guitar maker Daniel Friederick began doing this in the 70s. Australian luthier Greg Smallman laminates both back and sides of his guitars. Friederick and Smallman are both known for making loud instruments.

Back to Mr Smallman: His guitars seem to provoke strong reactions amongst players, some loving them (including John Williams) but others hating them, accusing the guitars of having a “banjo like” sound. I’ve no idea if they do or they don’t, having never played one but logic would seem to suggest if a top is made too light and a body too heavy, you’d be making a guitar shaped banjo and a banjo like sound is what you’d end up with.

Seems like a balance should be sought. Not too heavy in the body and not too light in the soundboard.

Of late there has been a trend with experimental luthiers towards making “double sided” guitars. Again, as far as I’m aware the first maker to intentionally do this for sonic rather than economic or aesthetic reasons was Friederich of Paris. I’d struggle to tell you who introduced this idea to the steel string world.

Now it’s normal for folk to think of certain timbers having specific sonic qualities and to also think that the luthiers role is to blend these qualities by mixing materials rather like a chef might make a bowl of soup, but when it comes to doubling sides, the materials start to become an irrelevance. What you’re doing is increasing mass and stiffness. It makes no difference whether you laminate rosewood to mahogany, or rosewood to sycamore, or ebony to maple. What you’re doing is increasing mass and stiffness. Sure, the amount you increase this by will vary from timber to timber, but thinking you’re mixing the sonic qualities of woods together sounds like a bit of a delusion to me. What seems more likely is that by doubling the side mass and stiffness the top works harder. Less energy is wicked out into the sides and more comes out the front as sound.

But simply laminating a pair of sides doesn’t add as much mass as I’d like.

How about three pairs of sides?

Hang on, if I keep going, you wouldn’t need linings, you could let the back braces straight into the thick ribs. That would be neat. I like neat.

So, last year, whilst in the hammock (my equivalent of Archimedes’s bath) I came up with a design where the sides are actually machined from a solid block. But a solid block of what? I asked a friend in the design trade and he suggested a new material, totally stable, inert, waterproof, easy to machine, strong and man made.

From the initial experiments (a guitar known locally as the “concrete guitar” a cylinder top guitar which got made and remade lighter and lighter several times) the Session King design has evolved. In the latest version, the rib chassis is machined in such a way to allow me to vary the side mass according to the results I want to get.

In effect the sides no longer “wick” energy away from the top. By taking the sides out of the sonic equation, we’re left with the soundboard and the back, and thanks to the added side mass, the soundboards work harder than your average or even above average guitar.

So that’s the conclusion I’ve come to: heavy body + light soundboard = responsive guitar. There is a little more to it than that, but that’s enough for now.

It’s all rather clever and a bit space age but I’m very happy with the results. The guitars are heavier than most acoustic guitars out there but no heavier than your average electric guitar, and certainly lighter than a dobro, but they’re very responsive.

And they’re louder than most banjos. They are what’s known in the U.S. as “banjo killers.”

And I ’m sure you’ll agree that being louder than a banjo is usually a good thing!