Irish bouzouki? Well, we’ve all heard of that, but how about a bit of Manx bouzouki? Who’s waving the flag for music from the Isle of Man?

Barrule are a musical trio who are doing their bit to place the Isle of man on the musical map. I recently spoke to Barrule’s Adam Rhodes (and proud owner of two NK Forster instruments) about their new album which came out at the end of last month.

NKF: Adam, thanks for taking the time to talk. You’ve recently been on tour promoting you new eponymous album, Barrule. How long has this project been in the making?

AR: That’s right, well it all started as an idea that Jamie had a few years ago for getting the word out about Manx music in general. There are some cracking tunes and musicians over there, something which isn’t necessarily known about across the water and further afield. So we decided to create an album of purely Manx music, using the trio format, but with guest musicians here and there. We wanted the album to be all about the music, and to showcase it in the way it deserves. I think/hope we’ve accomplished that!

NKF: Tell me about the sessions?

AR: Well we recorded the album in a fantastic ‘eco studio’ in Abergavenny, Wales, run by an extremely talented guitarist called Dylan Fowler. It was set in a lovely peaceful location surrounded by trees etc, and was a great place to clear your mind and get creative. Most of the tracks were recorded ‘live’, with the three main instruments playing at the same time, and we then added various instruments to that, where needed, as we went along. As we’re a new band, some tracks were pretty much written whilst in the studio. Although we obviously had some ideas beforehand, we were lucky to be able to spend some time working through the ideas and being creative. 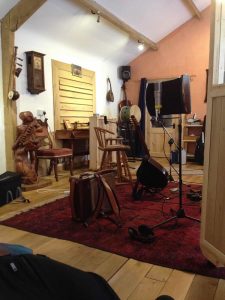 NKF: How did this collection of tunes come to be?

AR: We spent quite a lot of time sourcing and arranging the material for the album in early 2012. As we wanted it to consist purely of music from the Isle of Man, we spent time looking through the various Manx music books that are available, and coming up with ideas as to how we could work best with the melodies, making them interesting and exciting to new ears. Although the majority of the album consists of traditional Manx material, there are a few sets comprising of new tunes written by musicians still with us today too! So there’s a great mix of old and new in there.

NKF: So the writing process – is it always a collaboration? And how much of collaboration is about negotiation?

AR: I’d say for this album, pretty much everything was written in a collaborative way, yes. We obviously all had different ideas to start with, but we’d bring the ideas to rehearsals and all chip in with thoughts, positive or negative! There is a bit of negotiation sometimes, I think this is normal when working with different ideas from different people, but the end result has to be something that we’re all keen on – that’s very important.

NKF: So it must involve a lot of trust and mutual respect?

AR: Absolutely, I think we’re very lucky in that we all get on with each other very well, and having played together in different forms over the years, we have a mutual respect for each other’s playing. I think it also helps that we’ve come from different backgrounds, bringing different ideas and angles to the set writing… Jamie grew up in Wales and has developed his playing throughout the years with his band Mabon, I grew up from a Manx dancing background, playing with my Manx band ‘King Chiaullee’ and later found myself living in Edinburgh whist at University – so a wee bit of Scottish influence there, Tom also comes to some extent from the Manx dancing scene, but also has a strong connection with Irish music, and being 10 years younger than us other two, brings a fresh outlook to the whole thing I suppose!

NKF: One of the things I love about your playing, is how “unflashy” it is – it’s clear to me that the tunes, the music comes first. But this does mean that some may overlook your role. They don’t “get it”. Does this ever bug you?

AR: Not really no, I don’t really do the whole ego thing! With Barrule it’s ALL about the tunes, and although we do sometimes have some interesting arrangement ideas, if they get in the way of the tune in anyway, then we won’t use them. I think my role as the accompanist is to provide a strong and reliable backing to the tunes, marrying up with Jamie’s accordion left hand to provide a full and complete sound. I’m a big fan of the ‘less is more’ style, you don’t have to change chord every bar for example, sometimes holding one full open-sounding chord throughout a tune passage, or even a whole tune, sounds great! I could overcomplicate things in order to try and prove I can do more as a player, but that’s not what it’s about in my opinion – the tune is king!

NKF: So it’s been a busy year for you Adam, what’s next? You going to get the chance to take some time off?

AR: It has indeed! I’m very lucky to be involved with two exciting and hard-working projects, Mabon and Barrule… so it’s rare that I have a week to myself. I’ve recently moved to Glasgow, so it’d be nice to spend some more time up here in-between gigs. For now though I’m piling most of my energy into the Barrule album launch, once that’s done then it’s festival season! Not sure I’ll be having any time off in the foreseeable future…

Barrule can be found here:

You can buy the album here: