Just realised that today is 34 years since I started work as a guitar maker.
My apprenticeship began on Jan 11, 1988. This was, of course before people took photos of themselves all the time, so I think there is only one photo taken of me from my time working with Stefan. And I’ve lost it. Oh well. I remember the date because Andrew Hind, the other lad who worked for Stefan at the time wrote it on the wall above my bench.
This photo was taken in around 2008 when Dave Best took photos of me making guitars in the spare room of my council flat in Newcastle upon Tyne. I’d only been making guitars about 20 years by then.
If I compare how I work now to how I did when I learned back in the 80s, it very different. Certainly many of the processes I use these days are a lot more sophisticated and organised than they were in the 80s. You’d expect that – if you do the same thing week in week out for years, your processes will evolve. But many of the design principles behind the methods have remained the same. Wood behaves in the same way now as it did then.
That said, even though many of the processes I use are far more efficient than they were, it probably takes me longer now to make an instrument than it did back then. But then the way I build is a lot more complex. The standards expected by customers now are far higher than there were in the 80s and 90s and meeting those standards takes time. But it also makes the work more interesting.
Some of you may have bought the book I self published back in 2011. “Between the ideal and the possible.” Much of the stuff I wrote about guitar design, I no longer agree with.  I’ve made more instruments and learned more about how they work. But one thing still rings true – this is an interesting job if you want it to be. I may settle on designs and methods for a while, but only for a while. At any one time my attention is focused on improving one aspect or another, one process or another.
So I consider myself very lucky to have an occupation that I find interesting. that I still, after all these years enjoy doing. Not many folk can say that. So thankyou to all those who buy my work and have made this possible. And thanks in advance to all those who will do so in the future. I couldn’t do it without you all. 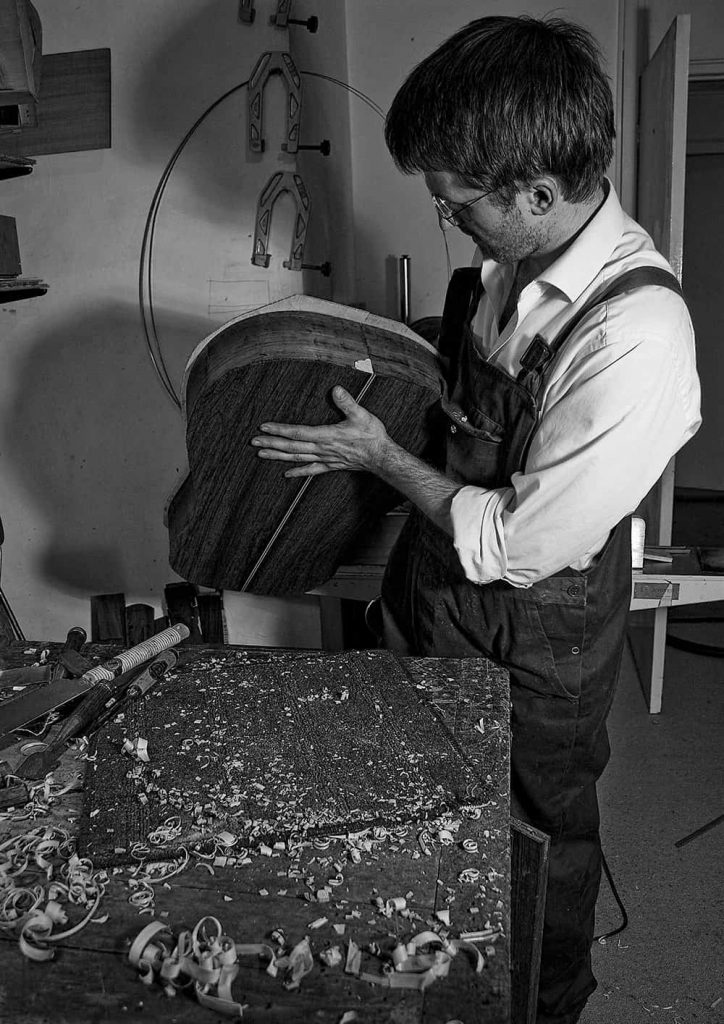